Co-sponsored by the Arts Administration program at Teachers College and the School of the Arts Theatre Program at Columbia University, actress, playwright and poet Dael Orlandersmith recently presented new work. This was followed by a Q&A moderated by Lynn Nottage, Pulitzer-winner (Sweet, Ruined) and Associate Professor of Playwriting in the School of the Arts.

Pulitzer finalist and Drama Desk Award nominee for Yellowman; Obie Award winner for Beauty’s Daughter; and recognitions too long to list, Ms. Orlandersmith was born in New York City — 122nd and Madison to be exact — and grew up in the barrio listening to Latin music, boleros and rock ‘n’ roll, the latter of which she is a big fan and connoisseur to this day.

In the beautiful Lantern hall of the Lenfest Center for the Arts, she began by reading a segment of work “fresh from the press.” Described as “fusion,” Ms. Orlandersmith is experimenting with a new style of writing: a hybrid between script, prose and poetry. Through her words, she transported us to her world, describing New York City, its individuals, and telling the stories of a group of people surrounding her as she wrote her ideas in a notebook in a lower Manhattan café.

We saw Ms. Orlandersmith at her best: one incredibly talented person who embodied a vast variety of characters involved in her narrative. Quickly changing her posture, her voice and her intention, she brought these people to life as she made acting choices and lived in the moment. Completely mesmerizing, the audience intently paid attention. They laughed and were moved by the stories from her carefully described characters — some new customers, some regulars — and portrayed her interactions with them, each one with their own individual realities and struggles, which varied from immigration to family feuds. 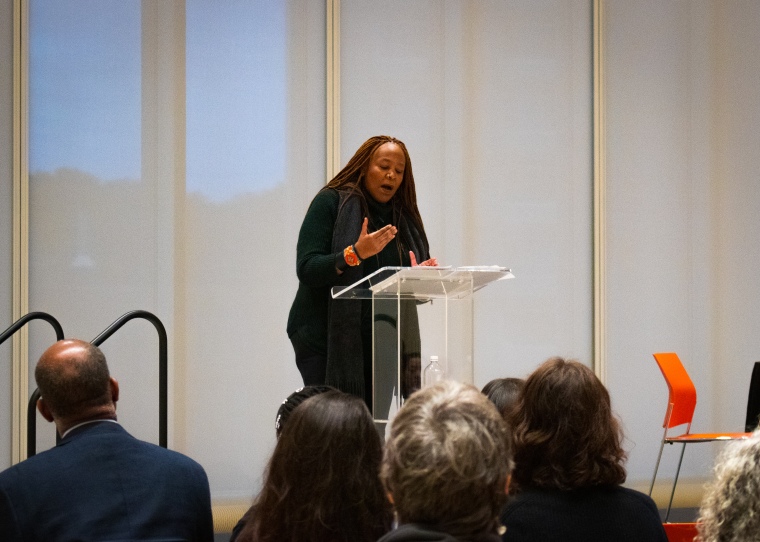 Ms. Orlandersmith is known for her capacity of inhabiting the lives of others with insight and compassion, which she describes as “pulling [their] spirits into your body.”  As she juggles with interpreting several people from other cultures, she mentions that “accents are tough, but we are all feeling the same things.” Whether telling her own stories or others’, each one of her works is carefully built by vast research and interviews when others’ stories are involved. She claims that theater serves as a tool to sit and talk, learning from the people by carefully listening with sensitivity, empathy and compassion, and “making the world my teacher.”

As Ms. Orlandersmith and Ms. Nottage dove into their conversation, they addressed the issues of racial profiling in theatre, and that external labels — such as defining her as an African American Female playwright — have complicated the opportunities of theatre-making, especially for people of color. “I hate the contextualizing labels. I listen to Rock ‘n’ Roll a lot, but they associate me with Jazz music. I am put in a box because I listen to ‘white’ music.” Furthermore, she shared that when she wrote Until the Flood — a play in response to Michael Brown’s murder in a suburb in St. Louis — she constructed a series of characters without specifying any type of gender or race. However, she discovered that, as the work was produced throughout the United States, the actors cast in the shows slowly become more exaggerated stereotypes of herself on a stage, which she sees as a narrow-minded representation that counteracts the purpose of the work and the effort she invested in crafting it. 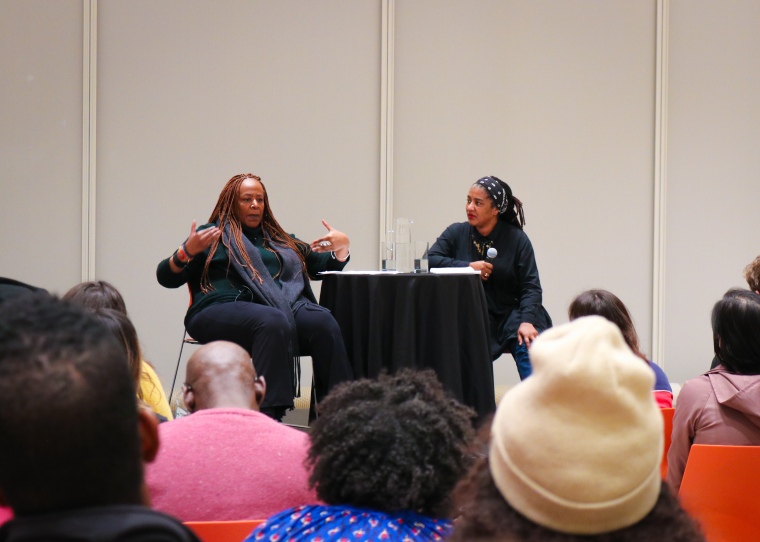 The attendees learned that, when it comes to being an artist of color, “we should be able to write everything, however you want to. Submitting yourself to write under other’s defined ‘black artist’ label is submitting yourself to the oppression. Don’t feel like you have to ‘represent someone’. Know your own story, but don’t keep yourself in a box. Don’t get stuck in a pigeonhole [nor] write as you are [wrongly] ‘expected to’.” According to Ms. Orlandersmith, work is a procedure of processing your pain and turning it into art: “You can’t have one without the other. Sometimes it’s scary, but all of my idols do it. Make peace with your darkness, with who you are. There’s beauty in it, and it becomes ours… Figure out ways to take control of your own art… [and] remember, we are citizens of the world.”

This article was written by Carolina Ide Carvallo (ARAD ’20). Thank you Carolina for the thoughtful write-up! 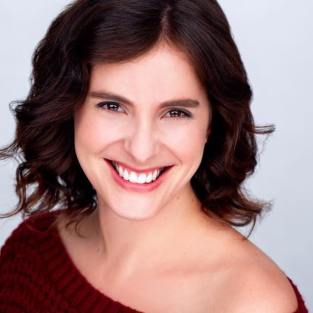 Carolina Ide Carvallo was born in Santiago de Chile. After obtaining a Bachelor in Business Administration at Universidad de los Andes in 2015, she attended The American Musical and Dramatic Academy to train in Musical Theater and Performance in New York City. As a performer, administrator and volunteer at the Sing for Hope Foundation, she understands the influence the arts have in people’s lives, and hopes to combine her knowledge and training to promote growth in the arts scene, granting its access to individuals and communities that need it the most.