Arts Administration alumnus Eric Oberstein (’09) is a GRAMMY and Latin GRAMMY-winning producer, arts administrator, musician, educator, and consultant. Oberstein currently serves as Associate Director of Duke Performances, the professional performing arts presenting organization at his undergraduate alma mater, Duke University. He also serves as an adjunct faculty member in Duke’s Innovation & Entrepreneurship program, where he teaches a course, Introduction to Performing Arts Management & Entrepreneurship, for Duke undergraduates. Oberstein is currently collaborating with Cuban drummer, composer, educator, and MacArthur Fellow Dafnis Prieto on the Dafnis Prieto Big Band, serving as Producer on a debut album, Back to the Sunset, released in April 2018 on Prieto’s label, Dafnison Music, and nominated for a Latin GRAMMY Award for Best Latin Jazz Album. The Latin GRAMMYs will air on November 15. 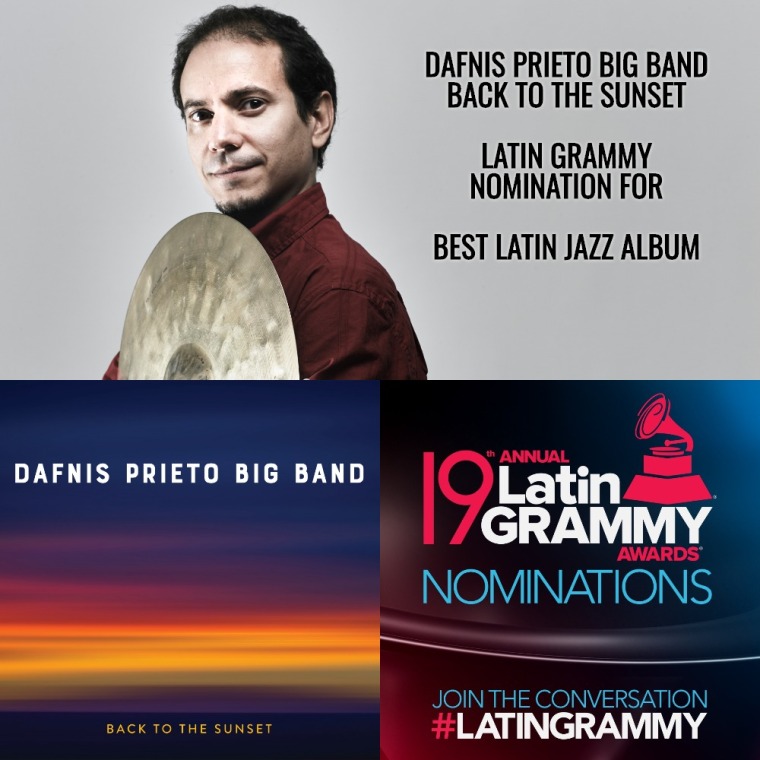 We talked with Eric about his experiences as a music producer, professor, and arts administrator:

In the making of the Back to Sunset video, you described calling up Dafnis Prieto and asking him what his dream project would be and he said a big band album. How did you make his dream a reality?

It’s true; Dafnis and I had a phone call about 2 1/2 years ago that sparked our big band project. Previous to that, though, we knew one another, as he had written a couple big band pieces for another collaborator of mine, Arturo O’Farrill & the Afro Latin Jazz Orchestra (I’m also a drummer and loved Dafnis’ writing and playing since I was in college, when I first started listening to his music). When we spoke over the phone, I really wanted to know what that big dream of his was, as I wanted him to feel excited about a potential collaboration and I wanted him to know that I was here to help support him to create something new, even if it felt crazy and unattainable. He knew about my background producing big band records, and once he said he wanted to make a big band album, I felt prepared to lay out a plan to get there. We knew it was going to be a big lift, so we created a timeline that gave us lots of lead time to make it happen. We started by drafting a treatment together describing the project, a common starting point when I work on a new album. Dafnis had composed a couple pieces for big band previously (for the Afro Latin Jazz Orchestra), but he wanted to write new compositions for the album and arrange some of his earlier work that he had written for his small groups; he began that work in earnest and it took him about a year to finish all of the music. We ultimately launched a website announcing the project including a crowdfunding campaign that we ran through our fiscal sponsor, Fractured Atlas, providing rewards to supporters at tiered levels. We then worked on assembling the band; the core would be the members of his sextet and then we would fill out the remaining seats with some of the top Latin jazz musicians in New York City. After months of fundraising, we were able to assemble the band in late August 2017 for three days of rehearsal, a three-night world-premiere run at the Jazz Standard in Manhattan, and then two full days of recording at Systems Two Recording Studios in Brooklyn. It was incredibly emotional to hear these amazing musicians bring Dafnis’ music to life. A couple months later Dafnis and I flew back to New York to mix and master the album with our engineers. We decided that we ultimately wanted to release the album on Dafnis’ independent record label, Dafnison Music, which celebrates its 10th anniversary this year. We assembled our team and collaborated on everything from the album art and package design to the marketing and publicity campaign, leading up to the album’s release on April 6 of last spring.

As a producer you have to do a lot of fundraising—how do you engage funders in the project?

I think it’s a critical first step to find the compelling story and narrative around a project; I’ll work closely with the artist to refine a treatment and get it to a place that is descriptive but also excites people to learn more and get involved. From there we’ll take that treatment to people we think might be interested in collaborating and contributing financially. It’s important that the project connect with a prospective supporter on a personal level, and they need to be able to imagine the finished product in their mind. Very often we’ll share early sketches or examples of the work to give them a sense of what the project might look and sound like, and what it could become. No matter the level of support, a funder wants to have the confidence that you have the capacity to execute the project and that the quality will be outstanding. You really come to develop relationships with supporters, who want to see you succeed and feel that they’re a part of your family and team. In addition to seeking support from individuals, we’ve been able to successfully apply for grants to support projects as well. These grants align with the goals of the project in some fashion, and my job is to be persuasive about the impact that the project will have.

Can you tell us about how the project with Dafnis Prieto continues now?

Now that the album is out in the world and thankfully has been met with a lot of enthusiasm, we’re working on booking gigs and tours for the big band nationally and internationally. We’re excited to be playing Zankel Hall at Carnegie Hall on Saturday, November 10. We’re also working on a bunch of dates for 2019 and beyond, which is great. In addition, we’ve been invited by the Havana Jazz Plaza Festival to present both Dafnis’ sextet and the big band at the festival this January. The big band performance will feature his sextet complemented by 11 Cuban musicians from the island, playing all of his music from our album, Back to the Sunset. This will be an incredible moment, as Dafnis is returning to Cuba to perform his own music on the island for the first time since settling in the United States 20 years ago in 1999. We’re fortunate to also be partnering with the New York-based non-profit Horns to Havana (dedicated to instrument donation and repair, as well as cultural exchanges in Cuba and the United States) to offer a Jazz Amistad (Jazz Friendship) program while we’re in Havana, in which Dafnis and the sextet will teach and offer educational workshops for students from three music conservatories, including Amadeo Roldán, Guillermo Tomás, and his alma mater, La ENA (the National School of Art). In addition, we’ve seen interest from big bands, both at the collegiate and professional levels, who want to perform the music from our record, so we’re exploring opportunities for Dafnis to join these ensembles as a guest artist and coach them on the music.

Dafnis and I are also hatching the next record we’d like to collaborate on, so stay tuned there! 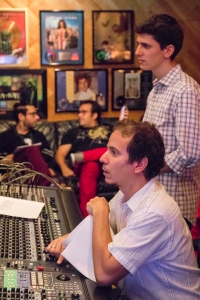 I’ve been incredibly fortunate to be able to collaborate with world-class artists such as Dafnis. Dafnis is a brilliant and singular drummer, composer, and educator; we’re fortunate to have individuals like him working hard to advance their art forms and say something new. In our case, we also instantly connected because of our shared Cuban heritage, and our interest in the music and education. Dafnis is a generous collaborator and is open to new ideas, which makes for a balanced partnership. I always aim to work with artists whose work I admire (it energizes me if I love the music or art) and who are seeking guidance on how to bring ambitious projects into the world. We both know and respect the expertise and perspective that we each bring to the table. Just like any relationship, we try to support one another and create a shared vision that feels authentic to the artist and what they’re aiming to say. My job is to help create the structure to bring that vision to life. Between my music producing work and my work at Duke Performances, I’ve been fortunate to collaborate with musicians, choreographers, theater makers, and others — I’ve learned so much from these projects about different art forms, how to best support an artist, how to be an advocate for a project, how to assemble a team, and how to empower that team so that all collaborators have a sense of ownership and investment in creating something beautiful and impactful.

What advice do you have for students who would like to build their career working directly with artists?

I think it’s important to ask yourself what sorts of artists you admire and respect. Go see those artists’ work, and support them. Don’t be shy to reach out to an artist; if you live in the same place meet them for a cup of coffee and get to know them. I think building friendship and trust is critical for meaningful collaboration to happen, as projects can take years and require you to support one another throughout that process. From there you can have open, honest conversations about their goals and dream projects and how you might collaborate. I think there’s a beautiful symbiosis between artists and arts administrators that’s essential; artists are able to create something new that didn’t exist before, that speaks to people in all sorts of ways, and arts administrators can support them in creating the conditions to bring those new ideas into the world. Also, as you collaborate with more artists, you’ll build a larger community of people with whom you can collaborate and call on to work with in different capacities.

You are now teaching the next generation of arts administrators—how did your experience in ARAD influence your teaching? As a seminar, what emerged from conversation with your students over the course of the semester?

I’m fortunate to teach a course at Duke for undergrads, Intro to Performing Arts Management & Entrepreneurship. My ARAD experience was wonderful; it gave me the tools to run an arts organization from top to bottom and how to be thoughtful about the many complex issues that face us as arts administrators. Because it’s just one course, each week I cover a different topic from the work; it’s almost like an ARAD curriculum condensed into one semester! In ARAD I had wonderful professors and mentors, including Joan Jeffri, Steven Dubin, and Martin Vinik, among others, who helped me to think critically about the many facets of arts administration. I definitely think of each of them as I prepare for my class each week, both in the content I want to present but also I’m inspired thinking back to the way that they solicited our ideas and solutions as students, empowering us to tackle issues as future leaders. I try to help my students feel excited and empowered to work in this field, to address the issues that concern them and collaborate with the artists that inspire them. I intentionally keep the class small as a seminar of 15 students. I learned so much from them last semester! The students have so many different interests and ideas, and similar to the way I produce records, I try to create a structure for the course that helps them think about how to follow through on their own goals. I’m excited to be teaching the course again this spring.

For more on Eric Oberstein, check out these other posts here and here.