Audrée Anid ’17 is Lebanese-American mixed-media artist and independent curator whose work spans photography, painting, and printmaking. Audrée was born in Ann Arbor, Michigan and grew up in the Bronx, New York. She holds a B.A. in Studio Art from Wesleyan University in Connecticut and an M.A. in Arts Administration from Teachers College, Columbia University in New York. She has exhibited at Photoville NYC at Brooklyn Bridge Park, Humble Arts Foundation, Equity Gallery, Brooklyn Fire Proof Gallery, Gallery at BRIC House, and Space Womb Gallery, among others. International exhibitions include Arts Suzhou in Suzhou, China and The Beirut Contemporary Global Art Fair in Beirut, Lebanon.  She was recently selected as an artist in the Artist on Art Program at Olana State Historic Site, in Hudson, New York in partnership with IAIA I Institute of Arab and Islamic Art in New York. She is based in Brooklyn, New York.

We caught up with Audrée to learn more about her work and upcoming exhibitions:

Tell us about what you are working on now.

As far as my art practice goes, I’m working on a few different projects simultaneously in my art studio in Bushwick. I’ve been working on a body of oil paintings entitled Formations, since last August. The paintings depict fragments of media imagery culled from online coverage of the ongoing Civil War in Syria.  I’m interested in the ways in which we decode and process digital information, examining what we chose to ignore and what we pay attention to. I’ve also been exploring text and language by printing and painting on paper. I’ve made over 100 of these works on paper since October (these will be shown in Chelsea on July 12th).

I recently launched RATA Projects, a curatorial initiative with independent curator, Rachel Tretter. RATA Projects grew out of a need and desire to give emerging artists a voice in the very competitive arts landscape of New York City.

How did it come together?

RATA Projects came together after Rachel and I (who both work at commercial galleries) wanted to pursue our own curatorial vision and found an engaging space to do so. The gallery itself is a unique space that comes equipped with a discreetly hidden speakeasy. We approached the owners of the space with a clear vision and proposal of the show, including a list of artists we would pursue. Since our first meeting, we’ve been focused on planning, outreach, and organizing, applying our collective knowledge toward the inaugural show, Skip/Salvage.

Can you share more about the messages for these exhibitions?

Skip/Salvage focuses on collage and sculptural constructions, with works comprised of domestic remnants, byproducts of manufacturing, and fragmentary objects from daily life recontextualized to create new meaning. The pieces in the show denote a specific place and time, often borrowing from the landscape of New York City as well as the artists’ personal memories. All of the artists in the show are based in New York and incorporate elements of the city into their work.

Eminent Domain is a flash exhibition of intersectional feminist art in Chelsea where I will be showing a 5-foot installation of works on paper. The painted words and phrases stem from personal interactions, text-message exchanges, and fragments of phrases borrowed from apologies that have been issued and circulated by the media by influential figures in society. The guerilla/flash format of this exhibition is intended to disrupt the norm of the white-box/blue-chip nexus of galleries in Chelsea. I think it’s incredibly important to give women a platform to showcase their work, especially since women make up such a small percentage of representation on gallery rosters. The artists in this exhibition are diverse; they include established feminist pioneers like Marilyn Minter, to more emerging voices (like myself).

How did ARAD prepare you for projects like these?

While in grad school, I honed my ability to multitask and prioritize responsibilities and I’ve certainly applied this work-ethic to my current projects. The extensive writing and analysis my courses encouraged have served me well in crafting proposals, press releases, and other written media.  My professors always challenged me to push my thinking further, shifting my ideas out of an abstract realm and into a clear material one, which I think my art practice has benefitted from.

Congrats to Audrée! We look forward to checking out Eminent Domain and Skip/Salvage. 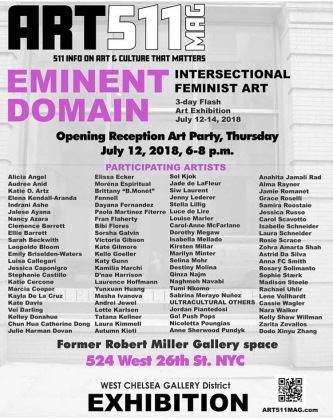 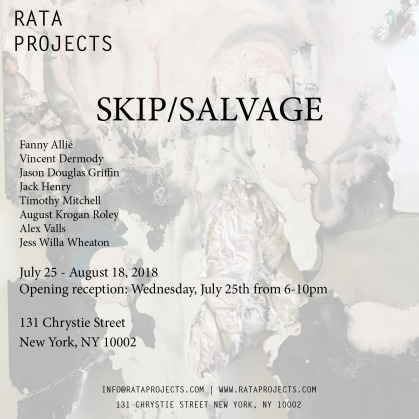