Our Spring 2018 Microgrant Recipient, Beryl Ford shared her reflections on Black Portraitures– BP IV: The Color of Silence, a conference she attended in Cambridge, Massachusetts with help from funding by the ARAD Microgrant.

It was such a rewarding experience to be able to use my ARAD micro-grant to
attend the fourth iteration of Black Portraitures– BP IV: The Color of Silence. As a
budding arts administrator, I found it truly inspiring to convene with the major players–
influencers, scholars, museum professionals—in the black art world who are thinking
critically about visual expression. This year’s conference theme– The Color of Silence–
was particularly compelling because it focused on the increasingly Diasporic nature of
the artists and ideas of the Black Portraitures community– finding its intellectual roots in
the African Diaspora as it is expressed throughout Latin America. As Henry Louis Gates
Jr. explained in his opening remarks, “The Color of SIlence refers to the visual
expressions of the national imaginaries prevalent throughout the African Diaspora, in
which political ideologies that negate racial differences render black subjects invisible.” 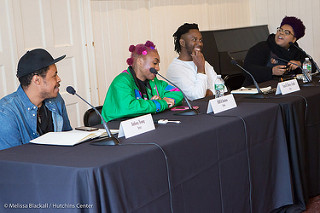 Each panel was thoughtfully organized to respond to and navigate this question
of invisibility. During the conference, I attended the following panels: The Curator, the
Artist, the Art Historian, and the Critic, Black Agency, Black Freedom: Portraits of
Survival in Word and Image, Portraits of Power: The Aesthetics of Resistance, and
Queer Identities. From each of these nuanced conversations, I gained a better
understanding of how the visual arts work to support activism and are deployed to shed
light on the experiences that are purposefully ignored and shrouded in darkness. As an
arts administrator, I believe that it is my responsibility to be aware of the barriers
precluding certain groups access to the visual arts! Given this, attending the BP IV
conference was invigorating because I felt as if I was part of a larger collective endeavor
that is working toward and is concerned with a similar goal.

Thanks for sharing your reflections with us Beryl, we are so proud to be watching you bloom!