ARAD was pleased to host Carl Sylvestre as part of its Spring Distinguished Speaker Series. Mr. Sylvester spoke about Fundraising for Social Change in the Performing Arts on February 25th, 2019. He has held senior positions at many cultural institutions including The Metropolitan Opera, Whitney Museum of American Art, New York Theatre Workshop and Theatre Forward. 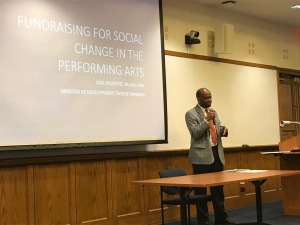 Mr. Sylvestre began by breaking down the differences and similarities between equity, diversity and inclusion as they relate to a performing arts organization. What I found most interesting the ways in which our (now very popularized) language around diversity initiatives can also hold so much weight that it can quickly becomes  polarizing in a given community.